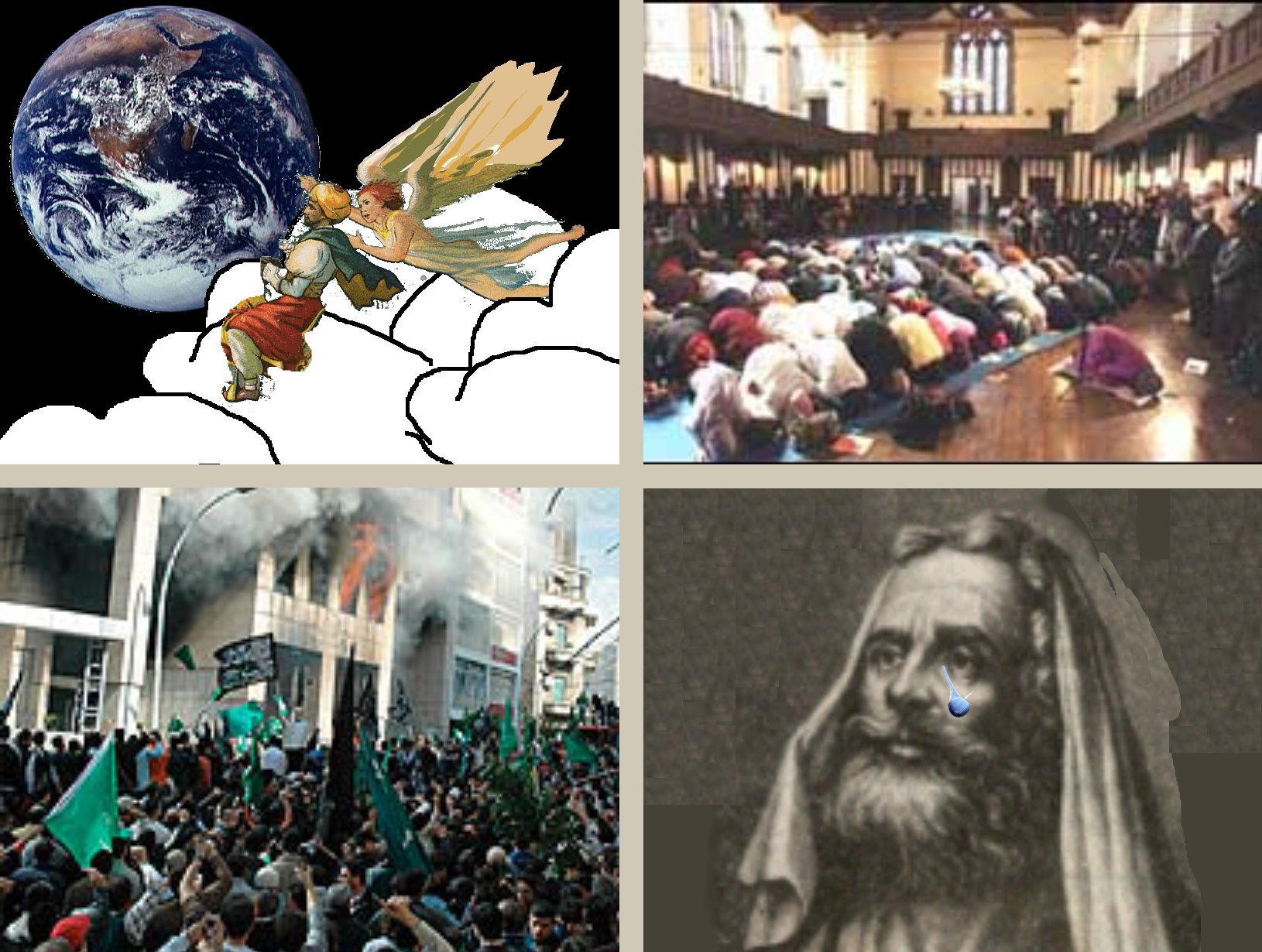 First they came for the cartoonists, but I was not a cartoonist, so I became one.

The recent uproar about the publication of the Jyllands-Posten cartoons and the rioting by what can only be described as fanatics has caused me some anguish. To resolve that anguish, I had to take my own little stand. In taking that stand, I put together a cartoon, mostly a collage of images from the InterNet with some minor editing. I wrote an essay detailing why I felt the need to create the cartoon and condensed the major point of the essay into a short form which could be submitted as a letter to the editor.

The whole works was sent to my MP, my PM and the editors of a couple of newspapers. I've no doubt that they will be dismissed as the work of a crank and that may not be an unreasonable view. Still and all, I feel the need to make my concern known.

Because the cartoon contains an image which is intended to represent the prophet Muhammad, peace be upon him, and because that is offensive to Muslims, and because our own religion strives to be respectful of other religions, I will not publish the cartoon in this newsletter. Anyone who would like to read the original essay and see the cartoon can ask me. I will describe the cartoon in words as follows. It is a four panel cartoon:

In the upper left panel, we see the prophet Muhammed, peace be upon him, and the arch-angel Gabriel in heaven with the angel pointing out something on the earth. The east coast of Africa and the Red Sea are clearly visible so we know the angel is gesturing towards the middle east.

The upper right panel shows a congregation of the faithful at prayer.

The lower left panel shows those same people rioting in the streets with an embassy burning in the background. There is an implication that something said in the mosque has inspired the violence and anger.

The final panel now focuses on the profoundly sad face of the prophet. A single immense tear is rolling down his cheek and reflecting the blue of the planet below.

The essay stresses the importance of freedom of religion and how that freedom is threatened when any group of people insist that everyone has to observe the canon of a particular faith. Respect is a two way street. As one of our hymns says: Sometimes, to question, truly, is an answer. The short letter to the editor, I will publish here as a letter from the editor:

Experts on the subject inform us that there is nothing in the Qu'ran that prohibits the production of images of the prophets. Thus, we are not in violation of the word of god as revealed by the prophet Muhammad, peace be upon him, when we produce such images.

Early in their initial expansion, Muslims encountered Christian sects which were committing the heresy of worshiping the icons which they had created, the images of Christ and Mary. So as to prevent Muslims from committing a similar heresy, a fatwa was issued prohibiting the production of such images. Clearly then, it is the veneration and, ultimately, worship of images which the fatwa attempts to prevent.

I have seen the Jyllands-Posten cartoons and, believe me, there is nothing there to venerate or worship. Most of the images are obviously the work of people commissioned to produce something about which they did not particularly care strongly. A couple of the images are thought provoking and thus worthy as cartoons. Clearly, the cartoons are not in violation of the original intent of the fatwa.

I think I can argue, though, that most of the arguments that I have heard about why Muslims are justified in protesting the images would lead me to conclude that the fatwa has, ultimately, failed. The followers of Islam now appear to have raised the prophet to such a position in their pantheon that they argue that it is sacrilege to produce an image of something so holy. By protesting cartoons, even peacefully, they are committing the heresy of venerating the image so much that they refuse to allow its production. Is this not the very same heresy that the fatwa was to prevent?

The above was published in the March, 2006, issue of Touchstone, the newsletter of the Unitarian Fellowship of Fredericton.